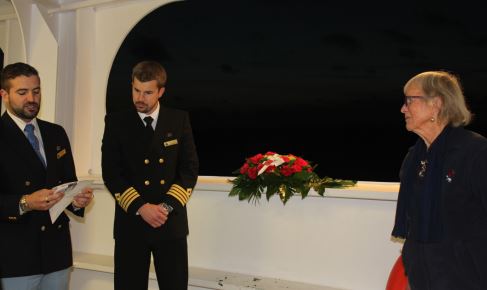 Wreath delivery aboard the Queen Mary 2

An ambitious four year project such as Thame Remembers will always include a few surprises but a particularly surreal moment was when Wendy Townsend, a Thame resident, contacted Dave Bretherton earlier this year with an extraordinary proposal.

Wendy was planning a trip to New York, returning by sea, and asked whether there were any Thame men in ocean graves along the route where she could place a Thame Remembers wreath on the surface above the wreck.

The logistical difficulties, not least in persuading a big ship to plot a route to meet our needs, initially seemed daunting but we did have a wreck in approximately the right area so we took up the challenge.

Our jaws dropped when we asked what ship she would be sailing on and she replied with “Queen Mary 2”.

We enlisted the help of the National Hydrographic Office to determine the precise marks for our target and Wendy secured the co-operation of Cunard in making it possible, with the result that on 17 October, at 7.00 in the evening, a Thame Remembers wreath was launched from the stern deck of Cunard’s flagship in commemoration of Lieutenant Commander Hugh McRae who perished in December 1940 with his vessel HMS Branlebas.